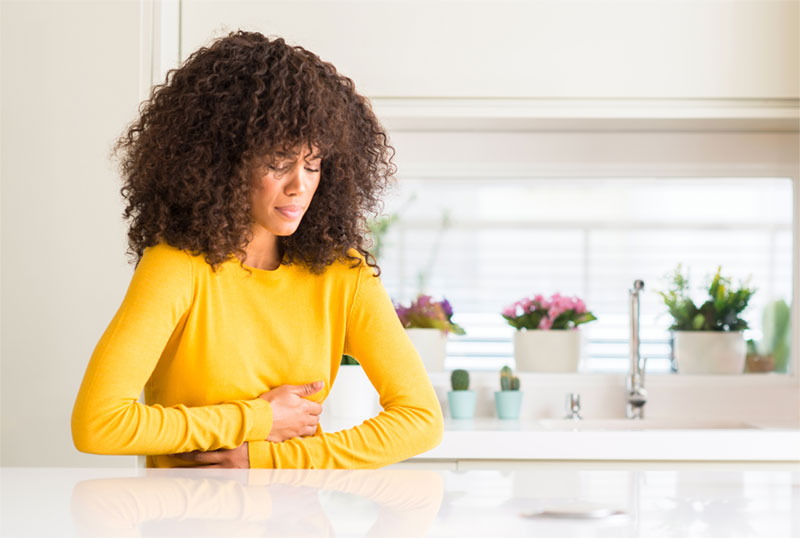 Fibroids are much more common than most women realize. In fact, some women live for years with symptoms and don’t even know that they have fibroids! Since these symptoms are common,  people ignore them. Often, fibroids are the last thing that women suspect as being the cause of their issues. We have complied a list of common but surprising symptoms of fibroids.

Heavy periods are a common occurrence, especially with women in the US. Did you know that menstrual periods that last more than 7 days is a warning sign for fibroids? The reason that more heavy bleeding occurs is the extra pressure put on the uterine lining. Intramural fibroids are ones that grow within the uterine wall. Pedunculated Fibroids are the kind that grow inside of the uterus.

These both can cause more surface area within the uterus, which creates trouble. As a result of the wider surface area, the endometrial lining becomes thicker. This means more lining must come out during the menstrual period. Along with severe bleeding, cramps that are worse than normal can occur.

To make matters worse, the extra bleeding can be so severe that it causes anemia in women. Feeling fatigue, dizziness, shortness of breath or headaches during menstruation can mean anemia. Be sure that you are supplementing or eating foods with iron and vitamin B12 if you think you could be anemic.

Pain in the Pelvic Area

Feeling pressure or unusual pain is a major warning sign for fibroids. Pain in the pelvic region can also be a symptom of other serious conditions. Pelvic inflammatory disease or endometriosis are serious health issues that cause pain. So, it’s important to see your doctor right away if you suffer from these pains.

Fibroids can put pressure on the rectum, making elimination difficult. This could mean painful elimination, along with constipation. This occurs when fibroids appear on the underside of the uterus. While this is a less common symptom, it’s still an important one to consider. If you are experiencing other symptoms, constipation should thought of as a red flag.

With fibroids that cause heavy bleeding and anemia, iron supplements are often prescribed. Iron might help exhaustion but could end up causing another issue altogether. Some women develop constipation from taking iron supplements. Pain in Legs and Back

This symptom is most common when the fibroid is of the subserosal variety. Subserosal fibroids are different than the ones that can cause cramps and bleeding. That’s because they grow on the outside of the uterus. Back pain will occur if the fibroid begins to press on the spine. Fibroids can even pinch nerves in the back, causing pain.

Another issue that can occur from this kind of fibroid is sciatica. Located mid-way down the back of the buttocks, is the sciatic nerve. Depending on it’s location, it can press on the sciatic nerve. Sciatica is when pain that starts in the lower back and buttocks and shoots down the legs.

What you can do

The symptoms we talked about are common and can aren’t always caused by fibroids. Since these symptoms are common, they often go ignored or underestimated. The sooner you treat your fibroids, the better. Fibroids can grow to large sizes if they are not addressed.

The first step is to stay in tune with your body. Use an app to help you track the flow and length of your period. Check the pain in your body. When does the pain occur? Where is the pain coming from? Don’t ignore back pain- or any pain in your body. It’s important to seek professional help if you feel like symptoms are having a negative effect on your health.. Doctors use ultrasound to check your body for any abnormal growths. Ultrasounds are painless and help doctors see everywhere that a fibroid could grow. Don’t wait, talk to your doctor as soon as possible.